This is a Napoleonic Wars British Heavy Cavalry Officer's Saber, the undress version... the one used on the battlefield...
( check the lovely 1796 Heavy Cavalry Dress version displayed in our collection) 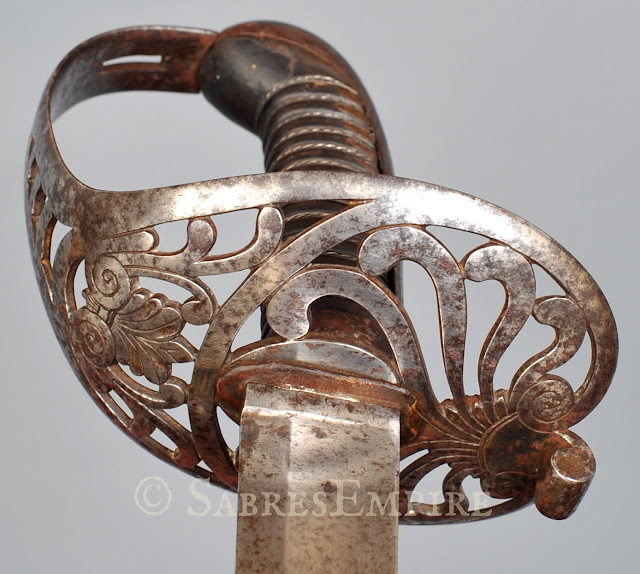 Unlike the recommendations of the 1788 ordonnance... that officers should carry the same pattern of sword as their men...the notable exception is, of course,...the 1796 pattern Heavy Cavalry officer’s undress (or service) sword !

Although the blade of the officer’s sword is the same as that of the trooper’s, the hilt is of an entirely different form.

The hilt of the trooper’s sword is the well known disc-hilt whereas the officer’s sword has a hilt of a form that has become known as the "ladder" hilt also called the first "honeysuckle" hilt.


Unlike the very effective 1796 Light Cavalry pattern sword, the 1796 Heavy Cavalry troopers’ disc hilt sword was a brute of a weapon... described as "lumbering, clumsy, ill-contrived machine, too heavy, too short, and too broad.", based from the Austrian pattern 1769 Heavy Cavalry palasch .

The 1814 Pattern Household Cavalry Officer's Sword was a much better sword, although a revival of the Palash style heavy cavalry sword.

The sword is 107 cm long overall and has a 87 cm long blade.
It weights 1.6kg with scabbard and 0.82kg without...much lighter than the trooper version. 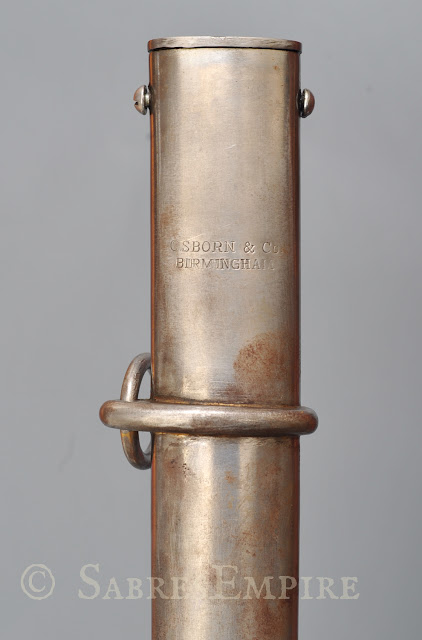 The scabbard is the same as the one carried by the troopers (ours may be a later replacement).
It has " Henry Osborn Birmingham" engraved on it (most likely a later engraving). 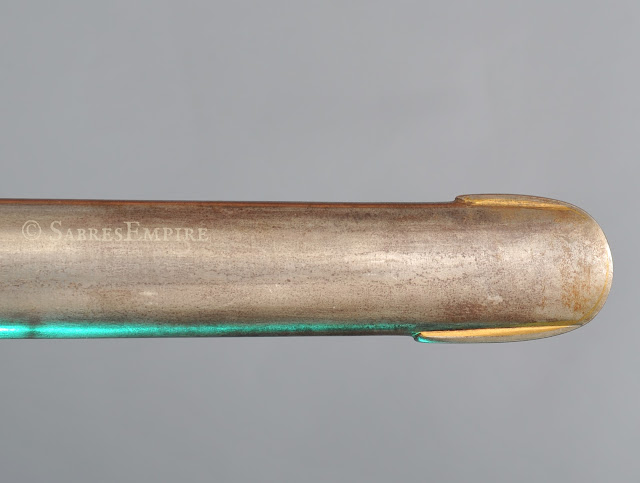 Henry Osborn was born in 1756, as a sword cutler he became a major supplier to the Board of Ordnance since 1785.
He designed in collaboration with John Gaspard Le Marchant, the new 1796 light and Heavy Cavalry trooper sabers...and was producing the new pattern from Birmingham.

In 1800 he moved to Bordesley Mills in Birmingham. He also had an outlet in London in Pall Mall. In 1805 he  went into partnership with John Gunby, he died in 1827. 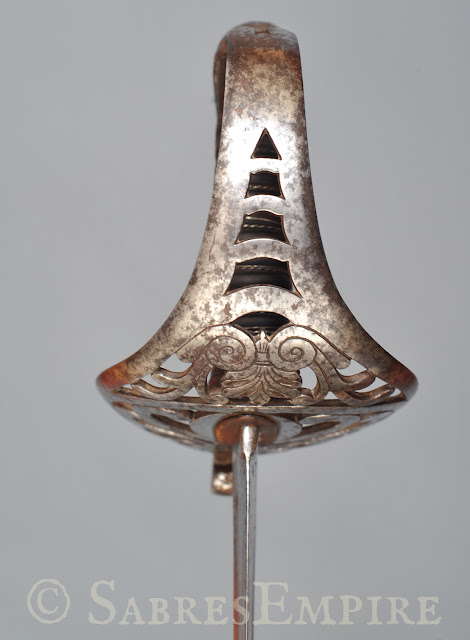 Originaly the blade had a hatchet point tip...the French cuirassier sword and blade was a much better weapon for the thrust ...so few weeks prior to the Waterloo campaign, it was ordered to ground down the tip of the blades to a spear point.

Some vendors are prone to conclude that a spear point means the sword was at Waterloo...It is NOT true at all.
Some heavy cavalry swords (troopers or officers) did have their point grounded prior to Waterloo...some did not!...as any military change in regulation....it takes time to apply the new rules!

Not so many British Heavy Cavalry regiments were in fact engaged at Waterloo...so the probability is less than a 1/3! 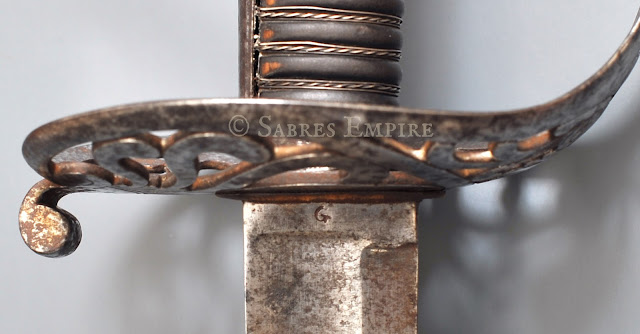 Ubiquitous "G" stamp to either side of the ricasso, it is believed might stand for "GOOD"...in any case it is an approval marking. 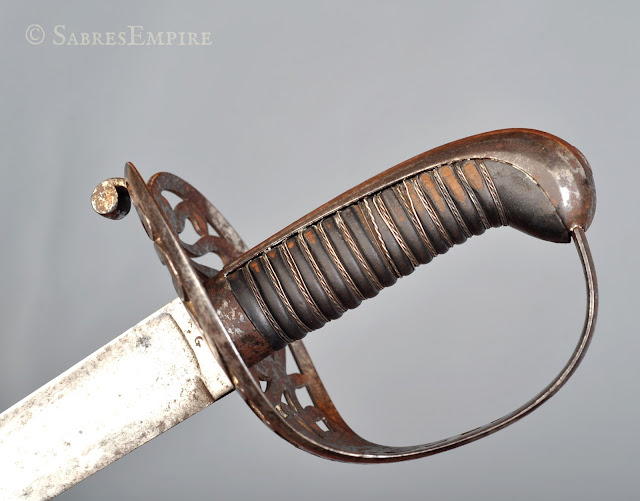 The 1st (The King's) Dragoon Guards

In the XVIII century, they were in the disastrous campaign in the Low Countries against the Revolutionary french army between 1793 and 1795, during the debacle they lost 76 men and no fewer than 353 horses. 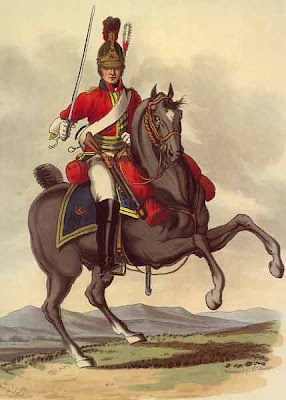 The regiment spent most of the Napoleonic wars in Ireland and England...but when Napoleon escaped from Elba they were quickly sent to Belgium and participated gallantly at Waterloo against the French Dragoons, losing 129 men and 134 wounded together with the loss of 263 horses.

Went to the Continent to participate in the Seven Years War, then went back to England to be quite engaged in the disagreeable task of keeping public order.
They were riding as far as possible...bay horses...although this was not recognised officially until 1870.
Two squadrons went to the Flanders campaign...and they played no role in the Napoleonic wars.

Active service in the Seven Years War...they were rewarded for their fighting qualities by being retitled the "Prince of Wales" Regiment of Dragoons.
They went to the Flanders campaign.
In 1809, embarked for Portugal to join Sir Arthur Wellesley's army and were in continuous action during the Peninsula campaign...few Heavy Cavalry regiments could have had a more splendid record over a period of more than 5 years!
Returning home in 1814...they were called too late to take part in the Waterloo campaign.

From 1798 and for almost 100 years...the regiment serves in Ireland to fight irish insurgents.

In 1811, the 4th went on active service overseas for the Peninsula as reinforcements for Wellington...
...but their elation was short lived for they were quickly reduced by sickness and seem to have contributed little to Wellington's campaign.

By December 1812, they had lost 239 men to dysentery and general debility and...

... in March 1813 suffered the ignominy of being ordered to hand over their surviving horses to fitter regiments and sent home !

The 5th remained in England until six troops were ordered to Portugal in 1811 to serve in the Peninsular War where they performed well at the battles of Salamanca, Vittoria and Toulouse, being particularly distinguished at the first where they suffered over 50 casualties and earning themselves the appropriate Battle of Honours.

The Regiment took no part in the Waterloo campaign for they had only recently returned from the Peninsula and would have had to be entirely rehorsed before they could take the field.

In 1807 part of the Regiment served in a curious expedition to Chile and the Rio Plata and after their return home spent some 30 years in various locations assisting the civil authorities in maintaining law and order, for these were troublesome times in England.
As a result of their peacekeeping duties the 6th took no part in the Napoleonic Wars, nor were they at the battle of Waterloo!!!

The 7th remained at home throughout the Napoleonic Wars employed at peacekeeping duties. 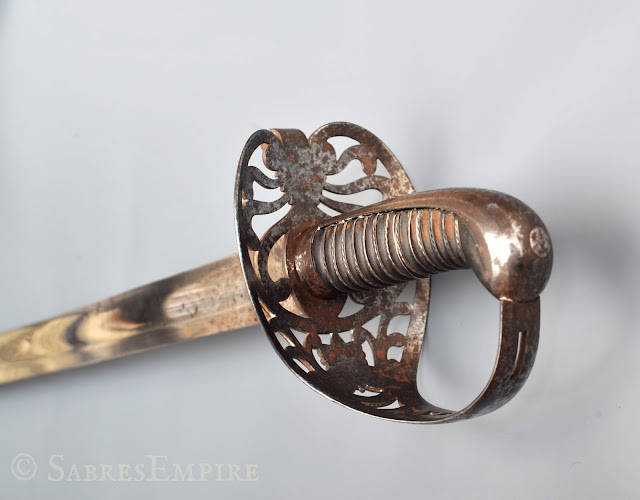 The UNION BRIGADE AT WATERLOO

From 1809 to 1814 the Royals were in the Peninsula, constantly before the enemy, from Torres Vedras in 1810 to the sieges of Cuidad Rodrigo, Badajos and Pampeluna and at the great battles of Vittoria and Toulouse.

At Waterloo the Royals united with The Scots Greys and Inniskilling Dragoons in the Union Brigade and were greatly distinguished, capturing the eagle of the French 105eme Infantry Regiment, for which feat they were authorised in 1838 to bear the Eagle on their guidons and appointments and later adopted it as their collar badge.

The Scots Greys laid claim to being the oldest dragoon regiment, having been formed from independent mounted companies raised between 1678 and 1681 in Scotland, but a Board of General Officers ruled in 1694 that their precedence in the British Army should date from when they first crossed the border into England, i.e. June 1685 and that the Royal Dragoons were therefore
ranked first before them, This may account for their defiant regimental motto of Nulli Secundus (Second to None).

Their popular sobriquet of Scots Greys probably derives from the stone grey coats they are said to have worn when they were first embodied, rather than from their grey horses which they do not appear to have taken into use until about 1700.

The frequent requisitioning of grey horses from other cavalry regiments for their use was a constant source of irritation to the commanding officers of regiments affected by these arbitrary orders from the War Office and led to the discontinuance of grey horses in regimental bands for it can well be imagined that it was regarded as an imposition for regiments to give up their fully trained grey horses to the Scots!

Charles Ewart born near Kilmarnock in 1769, enlisted in the cavalry at the age of twenty. He fought in a number of actions in the French Revolutionary Wars, then prisoner to emerge Sergeant at Waterloo.
He was a fencing-master , a heavily-built man, reported as 6'4" tall and of Herculean strength and accomplished rider... famous for capturing the regimental eagle of the 45e Régiment de Ligne!

The capture of the eagle is one of the most prized honours of the Scots Greys and, in commemoration of this, their cap badge shows the eagle.

The Greys had impeccable credentials as a fighting regiment, having shown their mettle in the frequent wars of the 18th century and particulary as part of the Union Brigade at Waterloo, in the charge of the Heavy Brigade at Balaclava in which Sergeant Major Grieve and Private Ramage earned Victoria Crosses.

In 1805, the 6th were sent to Ireland and remained there until 1814 when they returned to England, only to be sent to France in April, 1815 to take part in the Waterloo campaign as part of the Union Brigade.

At the battle of Waterloo they took part, with the Royals and Scots Greys, in the splendid charge which cost the French 5000 casualties.

At the end of the battle the 6th had lost so many officers that their remnants were commanded by a Captain.

Their total casualties in killed and wounded were seven officers, 23 NCOs, three trumpeters and 160 privates, as well as the loss of 191 horses.

Returning home they were sent to Ireland in 1819 where they were occupied for a time in putting down the White Boys' Insurrection.

The Inniskillings endured no less than eight tours of service in Ireland over a period of 33 years and may perhaps have welcomed the call to arms in the Crimea, in 1854, as a change from their disagreeable Irish visits. 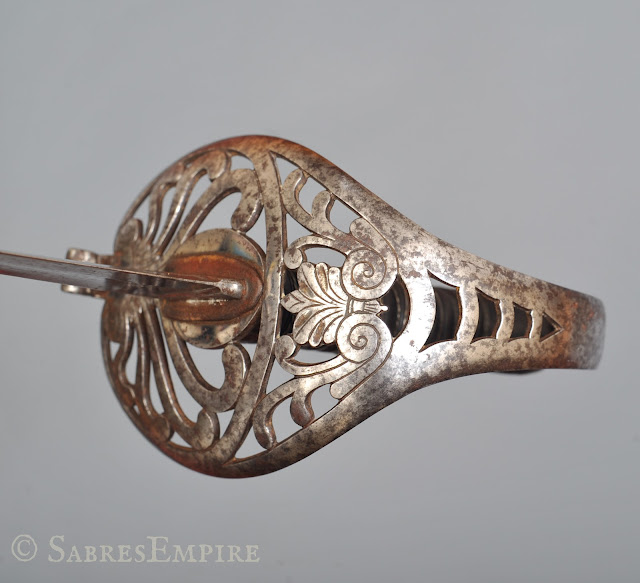 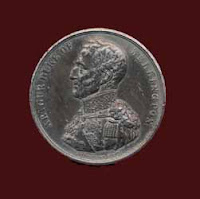