Simple but lovely sword from an officer of the 37th regiment of foot...circa the end of the XVIII century, a red coat's sword.

It is this model which inspired the creation of the first Light Cavalry sword, the 1788 pattern. 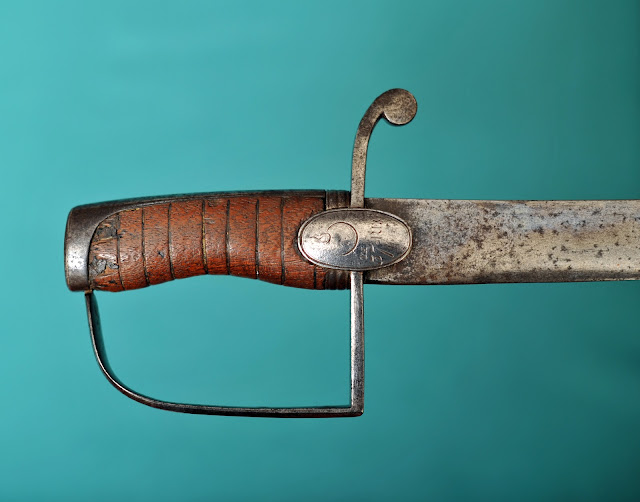 This model hilt style inspired the creation of the first Light Cavalry sword, the 1788 pattern.

The hilt style and the engraved grenade, on one of the languet, seem to point for a late grenadier's officer sword of the American revolution war circa 1780 or Flanders campaign in 1794.

The sword has a curved blade such as most of the Infantry regiment elite companies officers like to carry, a much effective weapon in the woods of America against militia, rather than the old spontoon.

The blade is flat with no gutter.
The stirrup hilt is like the 1788 Light Cavalry pattern, close to the pattern used by dragoons late eighteenth century  not as wide as the “stirrup” used in the 1796 light cavalry pattern.

The hilt has two langets, on one is engraved :

"37th REGt" with a flaming grenade 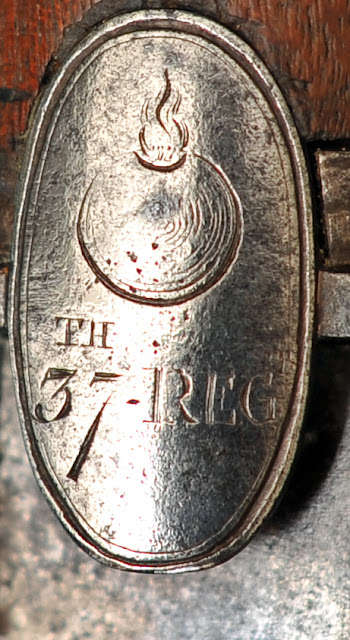 It's a moving sword with a deep graphite grey colour.
The scabbard has been gone for long time, it must have been a leather scabbard with steel mounts. 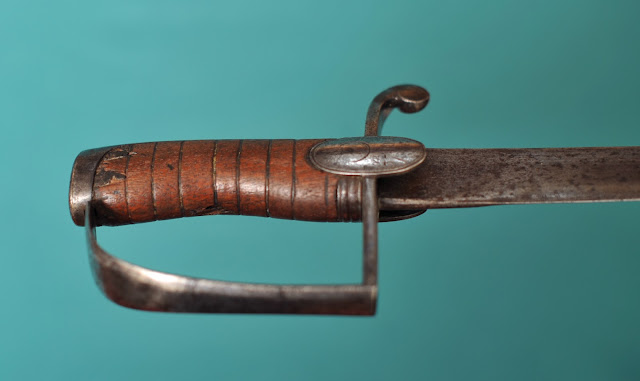 The blade has an  inprint (as the lead shot did not go through the blade) perhaps a buck shot.
The militia used what is referred to as buck and ball.  A full caliber round ball, probably .75 in. in diameter loaded with two or three smaller buckshot usually .25 inch in diameter or it's resulting from great-grandchild testing the blade with a modern tool! hard to say!

A simple but effective sword. 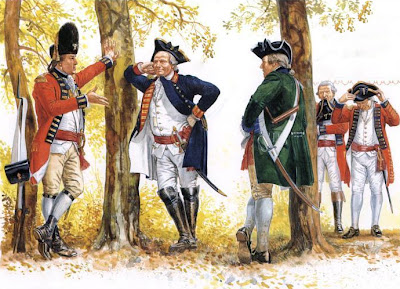 Grenadiers were among the tallest men in the regiment...but more important they were very reliable, steady and brave soldiers soldiers.
Grenadiers occupied the battalion right flank and were distinctive because of their tall bearskin hats and wings on each shoulder while the left flank was occupied by the Light Infantry Company, who, as skirmishers, wore less equipment and carried lighter weapons.

Grenadiers wera assault troup but could be used as skirmishers.

It became common to both flank companies to be drawn off their parent units and formed with other similar units into provisional assault battalions.

During the American Independance War, grenadier companies were formed into four semi-permanent battalions, building up an Esprit de Corps.

Our sword owner must have been a very proud  Grenadier to make engraved a flaming grenade on his sword!

and at the back a grenade engraved with the regiment number on it.

Grenadiers were expected to serve either as skirmishers or as a shock troops .

In 1786, Infantry officers were ordered to lay aside the spontoon and equip themselves with a proper fighting sword.
The experience of the American Independance war from 1775 to 1783 precipitated the abolition of the spontoon for a more practical curved sword.
Only the color sergeant kept the spontoon in order to defend the regimental color!

The 1786 royal order did ask for a one inch broad blade and a minimum of 32 inches in length, but most of officers carried a sword of their choice with straight or curve blade. 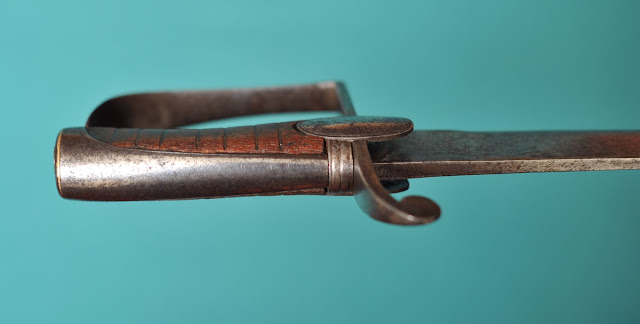 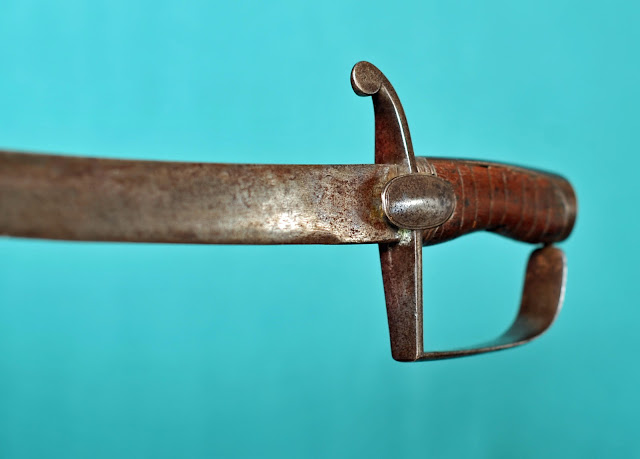 In 1796 was created a new pattern with a standardised double shell hilt and a straight blade very similar to the 1796 Heavy Cavalry dress sword that we own.

One of the oldest british army infantry regiment, created in1702 in Irlande.
Their ancestors were at the battle of Agincourt with Henry V in 1415.

The 37th Foot also fought with distinction in Marlborough’s Army, gaining the famous quartet of battle honours consisting of Blenheim (1704), Ramillies (1705–1706), Oudenarde (1708) and Malplaquet (1709).
On January 17 1746, it was present at the defeat of Falkirk under the command of Colonel Munro (the one of the Last of the Mohicans).
A few months later, on April 16, it fought at the victorious and famous battle of Culloden under Colonel Dejean.
It was stationed in Scotland until 1747 when it returned to the Lower Countries. On July 2 1747, it was at the battle of Lauffeld.

Initially called Meredith's Regiment, it was ranked the 37th Foot in 1747. Until the year 1751 it also used the names of its seven later Colonels (including Edward Montagu) and in 1751 became formally the 37th Regiment of Foot.

The very effective attack of the British infantry had virtually gained the day...the glory of the red coats!

The 37th arrived in North Caroline in 1776, to be transfered near New York.
There were no battle honours awarded to the 37th or the all british army for its involvement in the American War of Independence.


On June 3 1779, the British conducted a coordinated raid on the village of Crompond by elements of Beverly Robinson's Loyal Americans, the 37th Regiment of Foot, and Colonel Banister Tarleton's British legion.

The raid itself was obviously designed to be quick and punitive. No record exists of a large skirmish at Crompond during this raid, but they burned the church...this raid inspired the motion movie scenario Patriot)

Le 37th did the campaigns of  New York, Philadelphia, Brandywine and Monmouth Court House. The regiment was split into two units ...one went to Nova Scotia... the other one to Florida.

The 37Th Light Infantry company was at Yorktown, under Robert Abercromby's command, for the General Cornwallis surrender on Octobre 1781...playing "the world turned upside down"!

They were in New York in 1782 when they heard that they were to take the County name of the North Hampshire Regiment and be looked upon as attached to that division of the county....they went back to England then Nova Scotia. 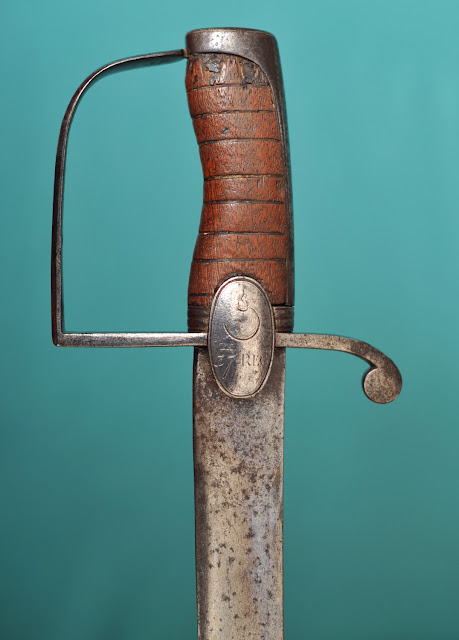 The 37 Th did a short participation in the profitless Netherlands campaign!
The Flanders Campaign was conducted from 1793 to 1795 during the first years of the French Revolutionary War.
A coalition of states mobilised military forces along all the French frontiers, with the intention to invade Revolutionary France and unseat the French First Republic...british troops were commanded by George III son, Frederick Duke of York.

The 37th first battalion will be in Spain during the Peninsula war under the command of sir Arthur Wellesley...
With the Queen’s,  Buffs (East Kent), 31st (Huntingdonshire),  50th (West Kent), 57th (West Middlesex), 67th (South Hampshire) and 77th (East Middlesex).

The 37th won the "battle of Honor PENINSULA".

The First battalion will be at the battle of  Barrosa near Cadiz in Spain on March 1811, againt Marshal Victor troops.
The 87th captured an Imperial Aigle from the 8 ème de Ligne at Barrosa. 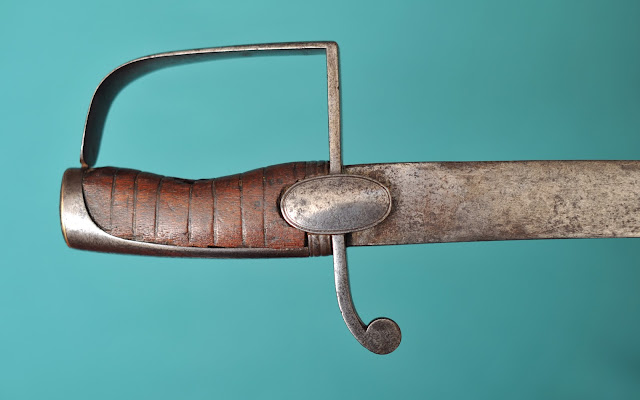 The same Captain James Jackson from the 37th will be at Waterloo as Lieutenant General Sir Charles Colville Aide De Camp. 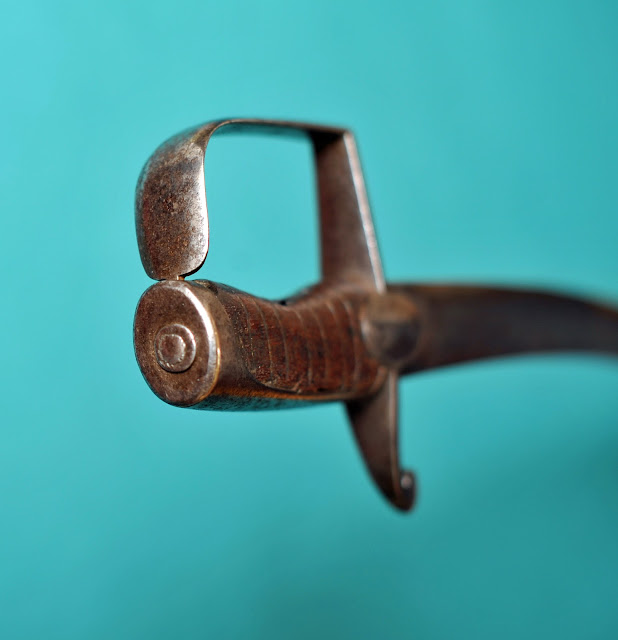 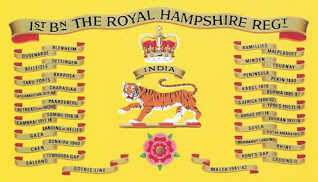 The Regiment was merged, in 1881, with the 67th (South Hampshire) Regiment of Foot to become the Hampshire Regiment.
It will be fighting during WWI and WWII including Monte Cassino, Irlande, Falklands and Afghanistan.

In 1992, as part of the Options for Change reorganisations, the regiment merged with the Queens Regiment to become The Princess of Wales's Royal Regiment.