This Officer Light Cavalry 1822 Pattern was carried by all french light cavalry, Horse Chasseurs, Hussars, Lancers, Horse Artillery, Spahis, Goumiers and will do all campaigns from the Mexican expeditions to the Crimean wars, the colonial wars in North Africa for more than 100 ans years.

This sword was a favourite sword for duellist, the US cavalry will use a very similar pattern sword.

We present two versions one from 1860 and one from 1892. Their steel scabbards had in 1887, their lower ring removed according to the new saddle regulation.

After 1887, swords were carried no more at the belt but attached to the saddle.

A curved blade was chosen on the assumption that this blade was also effective in the thrust and to minimize the number of regulatory model, which was the goal of the 1822 reform.

On January 18, 1822, the Committee of cavalry decided unanimously in favour of a curved sword for the entire Light Cavalry, using a Montmorency type blade.

However, as always, most models co-existed for decades, thousands of models year XI and few hundreds of 1816 model swords were still available in July 1870.

The National Republican Guard of France, the escort of the french Presidents and the high authorities of the State and City of Paris...is the heir of the various bodies that preceded it in the course of the French army history such as the Gendarmerie d'Elite and the Consular then Imperial guard of Napoleon or the 100 Guards for Napoleon III.

On October 1854, during the Crimea War, in order to save the light brigade after their terrible charge.

The First and 4th Regiment of Chasseurs d'Afrique (light cavalry ) strong of 532 swords, cleared the Fedyukhin Heights of the two Russian half batteries of guns, two Russian infantry battalions and some Cossacks, to ensure the British Light Brigade would not be hit by cross fire from that flank and later provided cover for the remaining elements of the British Light Brigade as they withdrew.

The charge was done with great success and a minimal loss.
2 officers got killed, 10 men killed, 16 horses killed and 28 men wounded and 3 men captured

The french General d'Allonville was in command of the charge. 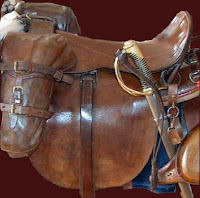 In 1887, the lower scabbard ring were removed to fix the sword on the saddle 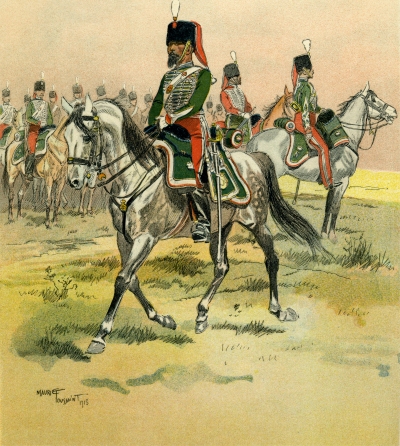